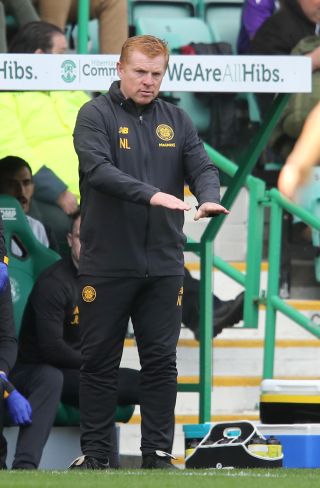 Neil Lennon has asked Celtic fans to turn up the volume in Thursday night’s Europa League clash with Cluj at Parkhead.

The Hoops go into matchday two in Group E on the back of a 1-1 Ladbrokes Premiership draw against Hibernian at Easter Road on Saturday, which by the end of the day saw their lead over Rangers at the top reduced to one point.

The title battle will resume next weekend but focus will now shift to the visit of the Romanian outfit to Glasgow.

“I hope the supporters are as well and I hope they get right behind the team because they are going to be really important for us.

“We need to get those European nights up to full decibel levels again so there is a connection and there has been between the players and supporters this season.

“I am really looking forward to the fans making Celtic Park a loud and intimidating place.”

Lennon was adamant that referee Kevin Clancy should have awarded the visitors two penalties and the former Celtic captain was in no mood to blame his players.

He said: “I am not disappointed with the performance, just the result.

“I am not going to criticise the players for that performance. We are still unbeaten.”

Hibs boss Paul Heckingbottom was also critical of Clancy, who sent him to the stand in the first half for an angry outburst after Ryan Christie’s header cancelled out an earlier own goal by defender Kristoffer Ajer.

Heckingbottom claimed everyone at the Easter Road club had been “let down” by the referee, especially when he gave Hoops midfielder Olivier Ntcham a yellow card instead of a red when he raised his hands at Josh Vela.

“They left everything on the field and also played really good football in the second half and Celtic had to resort to bringing us down when we were breaking away.

“They are gutted like me, they feel they have been let down, but we have to make sure they are proud of what they have done because they have been fighting against a lot.”