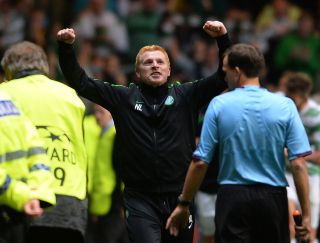 An injury-time goal from James Forrest ensured that the Scottish champions overcame the Kazakh side 3-2 on aggregate to qualify for the competition's group stages.

And Lennon revealed that the victory topped anything that he had achieved in the game to date.

"It's the greatest thing I have ever done in football," said the former Celtic midfielder.

"The last three months have been in preparation for this.

"Coming from two goals down tonight makes the players' performance and efforts more remarkable. I cannot speak highly enough of those players in that dressing room tonight – they were wonderful, absolutely wonderful."

Lennon also hit out at the criticism his side received following their 2-0 first-leg defeat in Astana.

"I am angry at the reaction from the first leg towards the team. The environment here is all wrong. There is far too much negativity.

"These players have given everything for the club and put Scottish football in a really good light last year. I wouldn't say we had a bad week last week, we didn't take our chances, we created plenty but the hysteria afterwards was disgusting."

Lennon confirmed after the match that Celtic are close to completing the signings of Schalke's Finnish striker Teemu Pukki and Israeli midfielder Nir Biton.