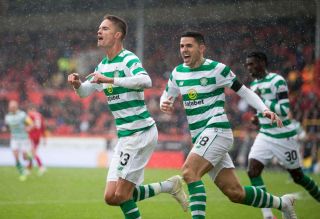 Neil Lennon heaped praise on Mikael Lustig after the veteran right-back set Celtic on the way to their Ladbrokes title clincher with the opening goal at Pittodrie on Saturday.

After James Wilson had missed two glorious chances for Aberdeen, the 32-year-old  Sweden international  dived to head in a cross from midfielder Callum McGregor to give the Hoops an interval lead.

The visitors flexed their muscles after the break and further goals from Jozo Simunovic and Odsonne Edouard secured a 3-0 win and an eighth successive title before the travelling fans and players began their celebrations.

Lustig signed from Rosenborg in 2012 and has won a league winners’ medal in every year since, amid several other honours for the Parkhead club who are still on course for an unprecedented domestic treble treble.

“He was a free transfer from Rosenborg. He has just won his eighth title.

“He plays all the big games, he plays Champions League last-16, Europa League, he was won trebles, captained his country. He is an outstanding player not only on the field but in the dressing room as well.

“I am delighted for him.”

Former Parkhead captain and manager Lennon was brought in until the end of the season in February after Brendan Rodgers left suddenly for Leicester.

The victory in the Granite City made it 11 games unbeaten for the Northern Irishman and was the most convincing league win.

There are two fixtures remaining against Rangers at Ibrox and Hearts at Celtic Park before the William Hill Scottish Cup final against the Jambos at Hampden Park on May 25.

“It has been coming,” said Lennon.

“We had been due to give someone a good going over and unfortunately for Aberdeen it was them.

“We started well and then got a bit sloppy, again Scott Bain made an unbelievable save at 0-0.

“Once we got the breakthrough, we were in total control the second half and a great way to finish off the league win.

“The mentality of the team is so strong and the quality of football at times was breathtaking.

“It has been a difficult period for me but really pleased to get over the line for Peter (Lawwell, chief executive) and Dermot (Desmond, principal shareholder), they entrusted me with the job and I feel justified in that aspect.”

Celtic skipper Scott Brown also recognised the contribution of Lustig, who is out of contract this summer.

He said: “He has been fantastic this season,  he is brilliant in the dressing room and pops up with goals as well.

“That is probably one of the biggest goals he has scored for us.

“It was a great run but it was a fantastic ball, no one expected Callum to whip that ball in and he has managed to find him.

“It shows you the top quality players we have at this club.”