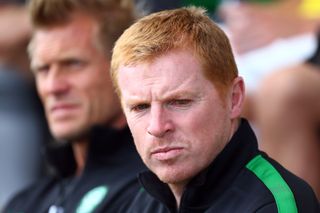 The Scottish champions were made to pay for some poor defending and wasteful finishing in the final third, as goals from Andrey Finonchenko and Sergei Khizhnichenko gave the hosts a healthy advantage at the Astana Arena.

The result leaves Celtic facing a difficult challenge to reach this season's group stages, but Lennon believes that they can still turn the tie around in the return leg at Celtic Park on August 28.

"It's a big task but the tie is far from over," he said. "We have plenty in us to turn the deficit around.

"The players will be very motivated. A few of the players are disappointed with their performances.

"We're still well in this tie but there's a lot to do."

Lennon admitted that his side's lack of cutting edge had proved particularly costly.

"We lacked a bit of composure in the final bit, we just needed a goal to change the complexion of the tie," he added.

"(But) we had plenty of chances and it gives us plenty of encouragement for the second game in Glasgow."