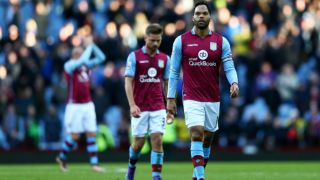 Lescott, 33, tweeted a picture of a £125,000 sports car without any text just an hour after Villa were demolished by a rampant Liverpool side for their worst home defeat in over 80 years.

However, the 26-time England international claimed the tweet was posted by accident while his phone was in his pocket as he drove home from Villa Park.

"I'm not one for tweeting after games whether it's a good, bad or indifferent result but I would like to apologise for the performance today, personally and collectively," Lescott wrote.

"Liverpool are and were better than us today but that doesn't excuse mine and the team's lack of commitment for 90 minutes. Again apologies to all the fans.

"I would like to add that the tweet sent out from my account involving a picture of a car was a total accident, it happened while driving and my phone was in my pocket."

Villa remain rooted to the bottom of the Premier League table, eight points away from safety.