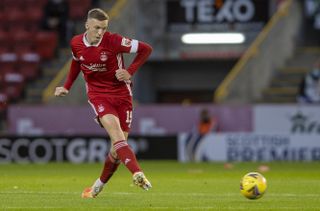 Aberdeen bounced back from their European disappointment with a 3-0 win at Ross County in the Scottish Premiership.

Marley Watkins’ 42nd-minute strike and two Lewis Ferguson penalties in the second half earned the Dons a comfortable win against a Staggies side that played the last 30 minutes with 10 men following Iain Vigurs’ red card.

County made a single, enforced change as Keith Watson replaced the injured Connor Randall, while Derek McInnes brought Niall McGinn and Scott Wright into the starting line-up in the wake of their Europa League qualifying defeat to Sporting Lisbon on Thursday night.

That meant Aberdeen were not short of creativity and flair going forward and they wasted a host of chances in the opening 10 minutes.

McGinn, Ross McCrorie and Watkins all had sights of goal, but it was Wright who came closest to opening the scoring when he hit a post.

Chances continued to fall Aberdeen’s way even as County settled into the game and they hit the woodwork again on the half-hour mark, McGinn the man denied this time.

The visitors finally got their reward just before half-time when Jonny Hayes, who was a constant threat down the left flank, was allowed the time to swing a brilliant cross into the area.

The ball just evaded the County defence and Watkins was there to guide an effort into the corner for his first goal in an Aberdeen shirt.

There was a tactical shift at the start of the second half, with Aberdeen happy to protect their lead and play on the counter attack.

The move won them a penalty on the hour mark as McCrorie was brought down by a desperate Vigurs challenge from behind.

The County man was shown a straight red card and Ferguson stepped up to make it 2-0 from the spot.

Ferguson was given another chance from 12 yards after 76 minutes when Josh Reid was penalised for handball.

The Aberdeen midfielder went for the same corner again and, although Ross Laidlaw went the right way, the goalkeeper could not keep the ball out.

County did not threaten any late drama, with Stephen Kelly’s free-kick that was deflected behind the closest they came to a consolation.