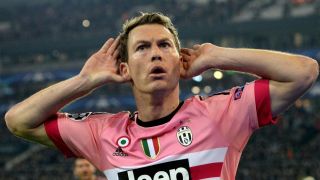 Juventus defender Stephan Lichtsteiner was concerned his career would be over after undergoing heart surgery.

Lichtsteiner had to be withdrawn at half-time of Juve's draw with Frosinone in September after suffering "breathing difficulties".

After over a month out of action, the Switzerland full-back made an incredible return to action in midweek, starting against Borussia Monchengladbach and scoring a stunning equaliser as Juve rescued a crucial Champions League draw.

"I was definitely scared about never playing again," Lichtsteiner is quoted by Gazzetta dello Sport. "It was a difficult time for me as heart surgery is a pretty big deal.

"Luckily, I had my family and friends to offer their support and love.

"Fans also sent me words of encouragement, and it wasn't just Juventini. There were supporters from every club. I guess that's the beautiful side of football.

"I always feel like I can score and so I try to be ready for whenever the opportunity comes.

"After so much time out I knew that I would likely not be at my best, but I kept working hard. [Juventus boss Massimiliano] Allegri often checked on me and I was feeling good.

"However I didn't expect to be starting, especially given that I had only participated in two training sessions before the match."