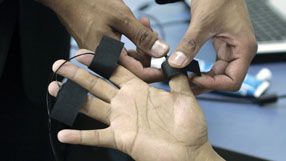 Lee told delegates at the Leaders In Soccer business convention at Stamford Bridge, the home of European champions Chelsea, that the use of polygraph tests for players was a key deterrent in the fight against match-fixing, though it could probably never be eradicated totally.

"Match-fixing is a cancer in football and it's everywhere, it's not just confined to Asia," Lee said.

Lee said the system had worked well in Singapore after being introduced on a random basis in 2001.

"We introduced polygraph tests and it is now compulsory for all players to go through them.

"We have taken a very strong stand against match-fixing and we are quite happy that it is working. You can never totally eradicate the problem but it is realistic to try and reduce it and this is one way we have done this."

He said it was now also compulsory for players to report any approaches they received from people about throwing games.

"The most vulnerable players here are the young ones or players nearing retirement; they are their targets. So it is mandatory for players to report approaches by suspicious bodies.

"Recently some foreigners flew into the country and offered a large sum of money to a goalkeeper and he reported this to our FA and we had these people arrested and they are now in jail in Singapore."

Asia's FIFA vice-president Prince Ali Bin Al-Hussein of Jordan, another speaker at the convention, said he fully supported what the Singapore FA was doing.

"It is one method and it is working so we welcome it," he told Reuters. "We can all learn from each other and I think in time it may become more widespread, we shall see."

FIFPro last week announced its opposition to the initiative taken by Lokomotiv Plovdiv.

"FIFPro totally disagrees with the decision of the Bulgarian club Lokomotiv Plovdiv to order their players and coaches to take lie detector tests," said the Dutch-based union in a statement, describing the tests as "dubious".

"If this tool were to be applied, then it should be used by the defence, not by the prosecutor," said FIFPro lawyer Wil van Megen.

Plovdiv's owner Veselin Mareshki ordered the tests after a surprise 1-0 defeat to struggling Botev Vratsa, who had been bottom of the table after five consecutive defeats.

He said he had to be sure there were no other factors behind the defeat.

Plovdiv, who have won only one of their eight league matches this season, fired coach Emil Velev on Wednesday and replaced him with former player Georgi Ivanov.