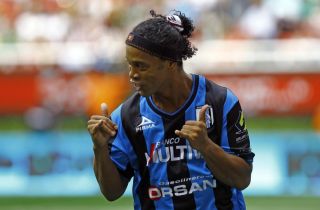 The Brazilian icon scored a sixth-minute penalty in Queretaro's 4-1 demolition of Guadalajara at the Estadio Omnilife on Sunday - ending the club's four-game winless streak.

After missing a penalty on his club bow in the Copa MX on Tuesday, Ronaldinho made no such mistake this time around - converting a spot-kick after former Mexico international Carlos Salcido was sent off for a foul inside the area.

Visitors Queretaro made the most of their numerical advantage after the break, with Camilo Sanvezzo and William adding to the scoreline.

Ronaldinho split Guadalajara's defence with an exquisite through ball between two centre-backs for Sanvezzo to poke the ball home in the 70th minute.

William was on target six minutes later, beating Jose Rodriguez from outside the penalty area.

Giovanni Hernandez came off the bench and reduced the deficit with five minutes remaining, though substitute Othoniel Arce restored Queretaro's three-goal advantage in the fourth minute of injury time.

After snapping a run of two draws and back-to-back defeats, Queretaro improved to 14 points after nine rounds - six adrift of America.

While America were 10-1 victors in the CONCACAF Champions League on Wednesday, Antonio Mohamed's men were three games without a win prior to kick-off against Pachuca.

But a Daniel Arreola own goal and Miguel Layun's strike 11 minutes from time secured maximum points for America.

America went ahead in the 31st minute, albeit fortuitously, after Arreola headed the ball past his own goalkeeper.

Pachuca were back on level terms with 12 minutes remaining, when Ariel Nahuelpan side-footed from close range.

However, Pachuca's joy was short-lived as Mexico international Layun popped up a minute later to win the match for America.

Atlas are two points adrift of the league leaders after defeating Cruz Azul 2-1.

A point further back are Toluca, who made it three wins on the bounce with a 1-0 victory over title rivals Monterrey.