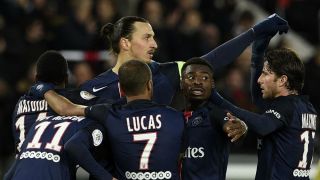 Paris Saint-Germain demolished fourth-placed Angers to maintain a remarkable 26-point lead at the top of Ligue 1.

Zlatan Ibrahimovic opened the scoring for the hosts with a low shot that took a slight deflection off Romain Thomas in the 32nd minute.

Lucas Moura doubled PSG's lead five minutes before half-time after a good run down the right from Gregory Van der Wiel and the Dutchman turned goalscorer for the hosts' third, converting from Blaise Matuidi's cross in the 54th minute.

The hosts pulled one back shortly after, when Pierrick Capelle volleyed home from 20 yards, but Angel Di Maria netted a stunning volley and a delicate chip to complete the rout.

Just before the interval, Vincent Koziello fired home a volley from 12 yards out to secure victory for the hosts.

Troyes scored three times in nine second-half minutes to record their first league win of the campaign at the 22nd time of asking, with Lille beaten 3-1 away from home.

Montpellier, another of Ligue 1's strugglers, are only out of the drop zone on goal difference after losing 2-1 at home to Caen. Montpellier let a lead slip after Ramy Bensebaini fired the hosts in front midway through the first half.

Sylvio Rodelin volleyed in an equaliser for Caen just before half-time and Andy Delort netted seven minutes into the second period to turn the game on its head.

Bastia finished their game with Guingamp with nine men and no points, following a 1-0 defeat. Floyd Ayite was dismissed in the 68th minute for a foul on Thibault Giresse, but Bastia almost emerged with a point, only for Francois Modesto to bring down Jimmy Briand in stoppage time.

The defender received his marching orders and Giresse scored the subsequent penalty to hand Guingamp victory.

Finally, Lorik Cana's 90th-minute own goal completed Bordeaux's comeback from two down, as they drew 2-2 at Nantes.

Kolbeinn Sigthorsson opened the scoring within 60 seconds to put Nantes in front and Alejandro Bedoya added a second for the hosts before half-time, but Cheick Diabate pulled a goal back for Bordeaux prior top Cana's late mishap.