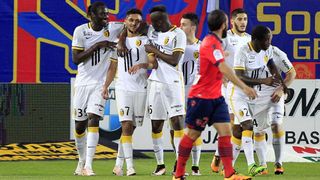 Lille and Saint-Etienne closed in on the top four in Ligue 1 as they continued their winning runs on Saturday.

A hat-trick from Sofiane Boufal guided Lille to a 4-2 win over Gazelec Ajaccio for what was their sixth consecutive victory.

Boufal's 19th-minute opener was cancelled out by Gregory Pujol for the relegation-threatened hosts.

But a red card to Roderic Filippi midway through the second half allowed Lille to take control.

Boufal struck twice after the sending off before Alassane Toure pulled one back, but a Pablo Martinez own goal sealed Lille's win.

With their victory, Lille moved into sixth – two points adrift of fourth-placed Nice and Saint-Etienne.

A 75th-minute Nolan Roux effort was all Saint-Etienne needed to edge past Bastia 1-0.

The win marked their fourth straight triumph as they continue to push for European qualification.

Paris Saint-Germain showed no sign of a Champions League hangover as Zlatan Ibrahimovic scored twice in a 6-0 demolition of Caen.

Ibrahimovic was the beneficiary of an Alaeddine Yahia mistake for his 31st league goal of the campaign, surpassing his best return in a season, and the Sweden striker set up Blaise Matuidi to make it 2-0 shortly before half-time.

Three goals in the space of seven minutes early in the second half then killed any hope of a Caen comeback as PSG ran riot.

Cavani tapped in the third, Angel di Maria scored the pick of the goals with an audacious chip and Ibrahimovic grabbed a second thanks to a well-controlled volley before Maxwell completed the rout.

At the other end of the table, Toulouse continued their decent form in their bid to avoid relegation, although may be left disappointed following a 1-1 draw at Lorient.

Pascal Dupraz's Toulouse had won three of their previous four matches heading in and took the lead through Wissam Ben Yedder, only to concede a 91st-minute equaliser as Zargo Toure struck.

Second-bottom Toulouse are a point behind Gazelec Ajaccio, while already-relegated Troyes had just their third league win of the season by beating Reims 2-1.

Meanwhile, all the goals were scored in the second half as Angers overcame Bordeaux 3-1.