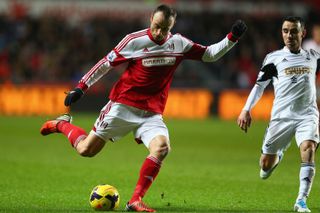 Bulgarian striker Berbatov netted a double to make it four goals in three matches as the Principality club won 4-1.

All the goals came in the second half at Stade Francois Coty, with Berbatov breaking the deadlock seven minutes after the restart.

He added a second with 16 minutes left, but the two-goal cushion proved to be shortlived as Gadji Tallo fired home for already relegated Ajaccio just a minute later.

Any hopes of a late comeback were fleeting, though, as Monaco added gloss to the scoreline with time running out.

First, Geoffrey Kondogbia found the net before Lucas Ocampos came off the bench to score a fourth in injury time.

The result means that leaders PSG had to put the champagne on ice, although likely only for 24 hours as they can wrap up the defence of their title by beating Sochaux on Sunday.

At the other end of the table, Valenciennes are on the brink of relegation after succumbing to a 1-0 defeat at Guingamp.

Ariel Jacobs' men needed at least a point to keep themselves in with a realistic chance of staying up, but a 61st-minute Claudio Beauvue header moved Guingamp up to 16th, five points clear of danger.

Defeat leaves Valenciennes nine points adrift of safety with three games to play, and they now require a substantial swing in goal difference to stay in the top flight.

Guingamp's victory sees them leapfrog Evian, who missed the chance to all but secure safety as they were beaten 2-1 at home by Saint-Etienne.

Benjamin Corgnet and Loic Perrin both found the net to put Saint-Etienne in command inside the first 15 minutes, before Daniel Wass pulled one back early in the second half.

Striker Marco Ruben then saw an equaliser ruled out for the hosts, and the game ended in unsavoury fashion for Evian, who finished the contest with nine men after Youssouf Sabaly was sent off for a wild challenge and Cedric Cambon was also dismissed for protesting the decision.

Saint-Etienne are now just four points behind Lille in the battle for the final UEFA Champions League place.

Montpellier came from behind to all but ensure their place in Ligue 1 for next season with a 2-1 success over Toulouse, while Valentin Eysseric scored the only goal of the game as Nice beat Reims 1-0.

Elsewhere, Rennes are still not sure of their top-tier status after a 1-1 Brittany derby draw with Lorient, but Metz definitely will be in Ligue 1 in 2014-15, securing promotion from Ligue 2 with a 3-0 win at Auxerre.