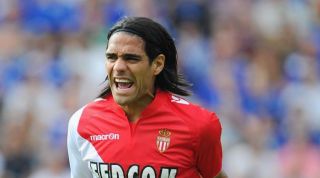 The Colombia international was in attendance as Dimitar Berbatov's second-half strike secured a draw for Leonardo Jardim's men who fell behind to Nolan Roux's effort after 17 minutes.

Falcao was withdrawn from Leonardo Jardim's squad, despite being named on the bench, and later sparked a social-media frenzy when a post surfaced on his official Twitter account, reading: "Dream come true #HalaMadrid."

The tweet has since been deleted and Falcao was quick to deny he had played any part in its appearance, but it will add to the growing uncertainty about his future before the transfer window shuts.

Monaco have only picked up one win in their first four games. Lille meanwhile missed the chance to go top but did climb to second as their unbeaten start to the season continued, despite conceding their first goal of the campaign.

Rennes picked up a second win of the season, beating Nice 1-0 at the Allianz Riviera - the hosts seeing Ngolo Kante sent off in the first half for picking up two bookings.

The game looked to be heading for a stalemate but Ola Toivonen converted a penalty two minutes from time to snatch victory.

Philippe Montanier's side remain level on points with Nantes, who edged past Montpellier 1-0 thanks to Serge Gakpe's late strike.

Early strugglers Reims and Evian remain without a win after slipping to defeats to Lens and Toulouse respectively.

Things had looked bright for Reims when Aissa Mandi gave them a seventh-minute lead but Prince Oniangue's dismissal midway through the first half led to a collapse as Lens moved 3-1 ahead by the hour.

Gaetan Courtet gave Reims false hope with 10 minutes to go which was finally killed off by Adamo Coulibaly's 87th-minute penalty.

Evian managed to keep Toulouse at bay for 78 minutes before Adrien Regattin struck, Aldo Angoula's late sending-off hampering Pascal Dupraz's side as they fought in vain for an equaliser.

Elsewhere, four second-half goals, including a brace from substitute Valentin Lavigne helped Lorient to a thumping 4-0 victory over Guingamp.