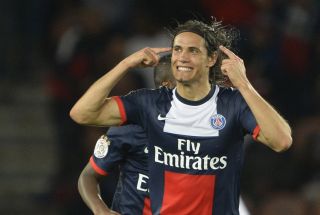 After having to settle for a point in their opening Ligue 1 fixture against Montpellier, PSG were in need of a win to keep up with the early pacesetters.

However, they were behind after 10 minutes to a superb Benoit Pedretti strike, and it looked as though the visitors would travel back to Corsica with all three points.

They withstood a barage of pressure from the title holders, who had over 30 shots shots in the match, before eventually being breached by Edinson Cavani's first PSG goal after 86 minutes.

Laurent Blanc's side would have secured a comfortable victory were it not for an excellent performance from Ajaccio goalkeeper Guillermo Ochoa, but they now sit in 13th place after the weekend's action - four points behind Lyon, Monaco and Marseille.

Claudio Ranieri's men enjoyed a convincing 4-1 win at the Stade Louis II against Montpeller, with Emmanuel Riviere hitting a hat-trick.

Montpellier's cause was not helped when Daniel Congre was shown a straight red card just after the hour mark.

Elsewhere, Lorient picked up their first three points of the season against Nantes after being forced to come from behind at the Stade du Moustoir.

A Fabien Audard own-goal put the visitors ahead after 17 minutes, but goals on 39 and 61st minutes from Vincent Aboubakar and Jeremie Aliadiere respectively ensured Christian Gourcuff's men moved up to 10th.