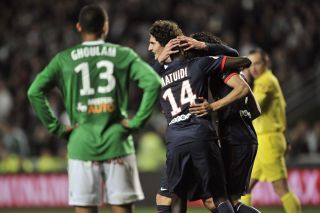 Romain Hamouma profited from a slip by Marquinhos to tee up Benjamin Corgnet's 18th-minute opener before doubling Saint-Etienne's lead himself six-minute after the interval.

The hosts were reduced to 10 men after an hour when Fabien Lemoine collected a second booking for a foul on Ezequiel Lavezzi before Edinson Cavani turned home Maxwell's cross to reduce the arrears eight minutes later.

But PSG's blushes were spared deep into stoppage time when Blaise Matuidi's ball into the box evaded everyone and nestled in the net to ensure it ended 2-2.

The result keeps the capital club at the summit ahead of Monaco on goal difference, following their nearest rivals' 2-1 home win over Lyon.

Mounir Obbadi and Radamel Falcao produced fine finshes within eight first-half minutes of one another to give Claudio Ranieri's men breathing space but Bafetimbi Gomis reduced the arrears with a header two minutes after the hour.

In the day’s other game, Bordeaux overcame Montpellier 2-0 – the visitors' task made more difficult by Yassine Jebbour’s 20th-minute red card for a rash lunge on Lucas Orban.

Bordeaux had to wait until 15 minutes from time to make their numerical advantage count – Cheick Diabate netting an emphatic half-volley before Ludovic Obraniak sealed victory.