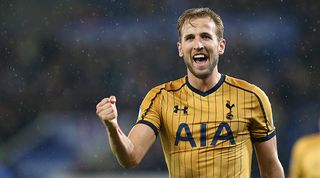 Kane scored 29 goals in the Premier League this season to win a second successive Golden Boot, as Spurs finished second under Mauricio Pochettino.

And Lineker believes there is no one better than the 23-year-old in the Premier League - and few better in European football generally.

"I can say he’s excellent and he’s becoming – if he’s not already – a world-class striker," Lineker told FourFourTwo. "I like his mindset – he loves playing at a high level, he’s not afraid of it.

"I don’t want to compare him to Cristiano Ronaldo because he is one of the great players of all-time, but Harry has the drive to score goals that someone like he has. He will shoot from anywhere, and I love that.

"He’s the real deal, and I think he’s going to score a lot of goals for England as well as Spurs because he has every facet of the game that you need, except perhaps blistering pace."

Record in his sights

Kane has already found the net 78 times in the Premier League, leading some to predict that he will eventually beat Alan Shearer's record of 260.

Lineker is one such person, although the ex-Barcelona man believes he could one day attract the interest of his old club, Real Madrid or another non-English club.

"He reminds me very much of Alan Shearer – strikes the ball well, is very good in the air, a goalscorer, driven and can be selfish when he needs to be. So I think he does have many of the same traits that Alan had," Lineker told FFT.

"If he stays fit and stays in England then I think he has an excellent chance of beating it [the record]. It’s all about games played, but he has started to become extraordinarily prolific.

"When you start talking about goal-a-game ratios, that’s quite something. It is easier to score nowadays with rule changes, because you see that with some of the numbers that strikers can manage. Certainly compared with my day, and maybe a little of Alan’s career too.

"But I think it’s definitely beatable if he stays in English football for the entirety of his career. He may well not – he might attract the likes of Barcelona and Real Madrid, and that is a possibility in the future."

Up there with the best

Lineker admits that Lionel Messi and Ronaldo remain in a league of their own, but the Match of the Day presenter believes Kane now belongs to the group of players just behind the Spain-based duo.

"This season, to score 29 goals in 30 games would surprise anybody. Especially to win the Golden Boot so emphatically when you’ve missed a part of the season is a great achievement.

"But his development hasn’t surprised me, because you could see quite early on that he wasn’t a fluke or flash in the pan. I stuck my neck out on Twitter and got massive abuse for it. I wonder where those people are now!

Harry Kane has a nose for goalscoring. He smells them. You either have it or you don't.November 23, 2014

"Kane has been the top scorer for two years in a row now, so that speaks for itself – he’s the best in the Premier League, and has proven that. Nobody is comparing him to Ronaldo and Messi yet, because they’re on a different level, but he’s coming into the group behind those and that’s a fabulous achievement.

"I think England will simply get the best out of him by playing him. It’s quite exciting what we have available up front right now; Rashford coming in, [Raheem] Sterling. That’s quite a blistering front three if he plays that way. Then there’s Dele Alli just behind them. But Kane will be pivotal to England’s development."