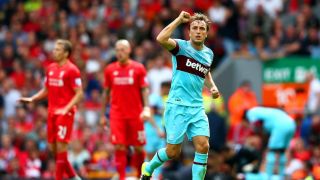 West Ham ended their 52-year wait for success at Anfield with a 3-0 Premier League victory over Liverpool that saw both sides reduced to 10 men.

Liverpool's improved defending this term has been a welcome boost to Brendan Rodgers but West Ham capitalised on slack play at the back to register a clinical victory in an action-packed affair that saw Hammers goalscorer Mark Noble and Philippe Coutinho sent off.

On his Premier League debut, Argentine playmaker Lanzini set the visitors on their way to a first win at Anfield in 42 attempts, opening the scoring from inside the six-yard box.

It was the first time Rodgers' defence had been breached this term but Liverpool fell further behind amid comical defending from Dejan Lovren.

Former Southampton man Lovren – whose recent improvements were hailed by Rodgers in midweek - inexplicably relinquished possession on his own byline and allowed Lanzini to play in Noble, who beat Simon Mignolet from 18 yards.

Coutinho's two bookings either side of half-time added to Liverpool's frustrations and, even when Noble saw red for a lunge on substitute Danny Ings, West Ham remained in control.

Diafra Sakho - arrested and bailed by police twice in recent weeks - coolly finished late on to add further gloss to a worrying scoreline for Rodgers.

Liverpool began with the confidence of a side that had shut out Bournemouth and Arsenal but fell behind to Lanzini's close-range finish.

After Martin Skrtel's clearance dropped for Aaron Cresswell, Lanzini stole ahead of Joe Gomez to prod the opener past Mignolet.

Liverpool played with greater urgency after falling behind and saw Roberto Firmino hit a post prior to Lovren's defensive gaffe.

Having given the ball away while looking to run through midfield, Lovren wasted two opportunities to clear his lines under pressure from Lanzini, whose attempted cut-back fell to Noble on the edge of the box and the away captain swept home a calm finish.

Lovren was lauded by Rodgers recently as having shown his potential to be "top class" but his lapse in concentration helped put Slaven Bilic's men into half-time with a comfortable two-goal cushion.

Things got worse for the hosts after the break when Coutinho was dismissed for a second booking.

Having been cautioned late in the first half following a foul on Dimitri Payet, Coutinho was shown a second yellow card for another mistimed tackle on the Frenchman.

The dismissal rules Coutinho out of a trip to Manchester United after the international break.

Rodgers introduced Ings for the largely subdued Firmino but West Ham's defending showed a marked improvement from the horror show in the 4-3 defeat to Bournemouth a week ago.

Bilic's midfield three of Cheikhou Kouyate, Pedro Obiang and Noble helped deal with Liverpool's limited direct threat late on, although the latter's straight red for a challenge on Ings will have dampened West Ham spirits somewhat.

The midfielder's dismissal - West Ham's sixth red of the season - seemed harsh although Sakho was able to pounce on a loose ball and timid Liverpool play to compound a difficult afternoon for Rodgers and his defenders.