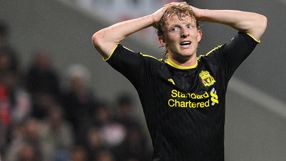 Suarez scored 81 league goals in less than four seasons with Ajax before leaving for Liverpool in January and the Dutch team could certainly have done with his nose for goal in Russia, having dominated the game and missed a hatful of chances.

Liverpool will also be unable to count on the 23-year-old forward because he is cup-tied.

"We are happy he is at the club and we just need to wait."

Although Suarez is absent, plenty of other South Americans have been enjoying themselves in Europe's much-maligned second-string tournament.

Brazilian midfielder Alex Meschini poached Spartak's winner at Ajax and compatriot Nilmar netted twice to give Villarreal a 3-2 win at Bayer Leverkusen and put his side in the driving seat in the clash between the only surviving Spanish and German teams.

Portuguese sides Porto and Benfica regularly feature up to eight South Americans in their starting line-ups, with Colombians and Argentines joining the more familiar Brazilians.

Porto have been a dominant force in the competition this year, losing only one out of 11 games, and are strongly placed to progress as they host CSKA Moscow with a 1-0 lead from the first leg in Russia.

The winner was courtesy of a superb strike from Falcao's fellow Colombian Fredy Guarin.

Salvio is hoping to collect a winner's medal for the second year running, having been part of the Atletico Madrid squad that lifted the trophy last year.

"I had a wonderful experience in the Europa League with Atletico. Now I am feeling the same with Benfica," said the 20-year-old whose team take a 2-1 lead to Paris Saint-Germain after goals from Uruguayan Maxi Pereira and Franco Jara.

"I think we can score in France... we all know it will be a very difficult game but we have very good, experienced players who can help us through."

"For me it's a big competition," he said. "Maybe some people don't give this competition too much importance but in Brazil the Eur