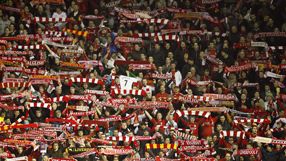 The five-times European champions, who share the record of 18 English league titles with Manchester United, are in danger of missing out on continental club competition if a revival in their league form does not repair a bad start to the campaign.

With clubs seeking to increase revenues ahead of new financial rules from UEFA to ensure they break even, playing in the lucrative Champions League or Europa League can help but Ayre said in Liverpool's case it may not be essential.

"If you invest in Liverpool Football Club you are not investing in this season, this player or this result," Ayre told Reuters in an interview on the sidelines of the Soccerex European forum in Manchester.

"You are investing in the institution that is Liverpool Football Club, that is over 100 years of football, that is England's most successful football club still.

"One of the reasons that we're one of the most supported clubs in the world is the success we had many years ago. People believe still and they invest still and they love Liverpool still. That's what people are investing in, they are not investing in how we perform next week or next year."

Ayre, promoted earlier this month from commercial director, said the club were focusing on increasing their global presence commercially and that "significant revenue" could come from a naming rights deal if they moved to a new stadium.

Since being taken over by American John W. Henry's New England Sports Ventures last October, the club have been considering whether to push ahead with a previous plan to build a new stadium or to expand their existing Anfield ground.

"We're exploring naming rights as a proposition to look at the economic model for a new stadium so that in theory would be the next big deal in that type of sponsorship area," said Ayre.

Ayre, 47, understands as well as anyone what sponsors are buying into at the club having grown up as a Liverpool supporter who used to mind cars for Everton fans on matchdays to save up money so he could buy tickets to watch his own team play.

In those days, Liverpool were enjoying some of their best years but Kenny Dalglish's side are now in sixth place, needing to finish fifth to guarantee a Europa League spot. They trail Tottenham Hotspur by four points having played a game more.

Even if they made it up to fifth, it would still be the second year in row that they miss out on the Champions League.

Not that their main sponsors are worried about that.

"The Champions League is not that important to us because it happens at a time most of Asia is fast asleep," Gavin Laws, group head of corporate affairs at Standard Chartered, told delegates earlier on Thursday.

The bank, which does much of its business in Asia, signed a four-year shirt sponsorship deal with Liverpool in 2009 worth a reported 80 million pounds.

"People don't get up in the morning to watch a whole game," Laws added. "They see the result and they might just skim through and see the goals."