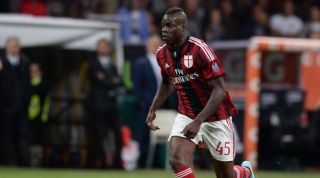 Serie A giants Milan announced on Thursday that Liverpool have an agreement in place to sign former Manchester City striker Balotelli, subject to a medical and the agreement of personal terms.

Liverpool boss Brendan Rodgers categorically ruled out the possibility of purchasing Balotelli before his side played Milan in the International Champions Cup in the United States earlier this month.

However, the Northern Irishman - who has been on the hunt for a top-class forward to replace the departed Luis Suarez - has now had a change of heart after rumoured moves for the likes of Radamel Falcao and Edinson Cavani came to nothing.

The Merseyside club finalised the deal, for an undisclosed fee and subject to registration, on Monday and the Italy international is relishing the opportunity to play in England for a second time.

"Liverpool are one of the best teams here in England and the football is very good here.

"It's a great team with young players, and that's why I came here."

Ex-Inter man Balotelli returned to Serie A in January 2013 after an eventful two-and-a-half stay at City.

The 24-year-old was rarely out of the media spotlight throughout his time at the Etihad Stadium thanks to a number of high-profile incidents both on and off the pitch.

Balotelli scored 26 goals in 43 league appearances for Milan, but speculation that he was heading for the San Siro exit door has grown since the club failed to qualify for this season's UEFA Champions League.