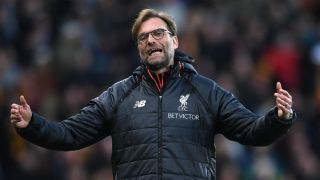 Jurgen Klopp was at a loss to explain Liverpool's latest defeat after the Reds turned in a listless display in the 2-0 Premier League reverse at lowly Hull City.

Liverpool's season has gone off the rails in 2017, a return of one win – that coming against fourth-tier Plymouth Argyle in the FA Cup – in 10 matches representing an alarming fall from grace.

Simon Mignolet's latest mistake led to Tigers debutant Alfred N'Diaye's opener on the stroke of half-time before the hosts rubbed salt in the wound as Everton loanee Oumar Niasse netted a late second.

"At this moment obviously that was not enough," said Klopp in quotes reported by BBC Sport. "The first half for sure was not enough. We gave both goals away easily, the overall performance was not like it should be.

"It makes no sense for us to play like this. If we played like we did in the second half for the whole game no team can cope with us. But we need to wake up, that was not acceptable.

"I have a lot of thoughts at the moment and I can't even say a few of them right now because I really need to think about what happened.

"We had a lot of possession, but what is possession? Possession is only good if you create something. It was not like we expected from ourselves.

"We have to take the criticism, think about, find a few answers and react."

FULL-TIME Hull 2-0 Liverpool. The hosts record a memorable win over Liverpool as N'Diaye and Niasse both score February 4, 2017

In trying to find positives amid the gloom, Klopp was pleased that his side continue to create openings, though he admitted some opponents may have got the measure of his system, which for the first half of the season was so potent.

"Yes we have quality still, but we have to show it, it's not to talk about it or to find excuses," the German added.

"Maybe a few teams have found a solution to us, but that doesn't matter because we are making chances and should score goals.

"We have to earn it, deserve it, with the effort that you put into a game. We have to bring the quality that we have consistently. I don't want to find excuses, it is hard to think of intelligent things to say after a match like this."

Opposite number Marco Silva struck a very different chord, having seen his side take four points and keep two clean sheets against traditional English powerhouses Manchester United and Liverpool in the space of a week.

"It is fantastic, a fantastic afternoon for us," he said following a fourth consecutive home win in all competitions. "Our supporters were fantastic, we need them and they support our team always.

"Our players showed fantastic spirit, our organisation was good and we deserved the win.

"I am sure in the future we will play better, but at these moments we need to keep our focus and our organisation, because every game it is possible to get valuable points.

"In the Premier League it is fantastic to get clean sheets, to do that against Manchester United and Liverpool is fantastic.

"I know why I came here, I am here to work with my players and staff and to remain in the Premier League. It's important for us to take points, and three points here is fantastic."