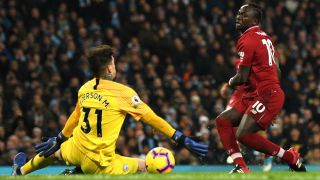 Ederson says Manchester City treated their crunch clash with Liverpool as "a matter of life or death".

The defending Premier League champions went into last week's meeting at the Etihad Stadium trailing the leaders by seven points, knowing defeat would leave them facing a tall order to overhaul Jurgen Klopp's side with less than half of the season remaining.

But goals from Sergio Aguero and Leroy Sane, either side of Roberto Firmino's equaliser, saw City cut the gap to four points and breathe fresh life into the title race.

And goalkeeper Ederson says there was no chance of anyone in sky blue playing down the importance of the meeting.

We WANTED it and we GOT it!

"For us it was a matter of life or death," he told Sky Sports.

"We knew the circumstances around the game - drawing or losing was not an option. We only contemplated winning, and we did a great game.

"It was our best game in the Premier League so far, and hopefully we will continue at the same level as of now."