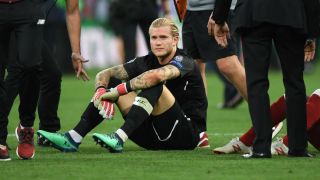 Liverpool moving to bolster their goalkeeping options before the start of the Premier League season is a must according to former Anfield favourite Graeme Souness.

Jurgen Klopp is reportedly on the verge of making Roma's Brazil international Alisson the most expensive goalkeeper in football history.

The 25-year-old boarded a plane in the Italian capital on Wednesday and is expected to complete the formalities of a £67million switch.

Alisson's arrival would be widely viewed as a response to Loris Karius' error-strewn showing in the 3-1 Champions League final defeat to Real Madrid, where he was culpable for goals by Karim Benzema and Gareth Bale.

Another mistake leading to a Tranmere Rovers goal in a pre-season friendly earlier this month brought fresh scrutiny and Souness believes Klopp would be making himself a target in the event of persisting with the former Mainz keeper.

He told beIN Sports: "The manager is in a difficult position. He'll want to be loyal, he'll want to be seen to be doing the right thing by Karius, but if you get to another big game and he lets you down again then people would be critical of the manager.

"I think he has to go and get another goalkeeper.

"People make mistakes, that's part and parcel of any professional sport. But to make two on such a big stage, I think that means it's going to be difficult for Karius to remain as the number one at Liverpool.

"He might need to be a number two again and he might come back that way. But to put him in as the number one, to carry that burden is a lot of pressure on himself. Then you have to wonder the level of confidence the players around him would have."

8 - Alisson conceded 28 league goals last season (excl. OGs), but based on Opta xG data for the shots on target he's faced, the average goalkeeper would've been expected to concede 36 goals. This was the biggest differential by a Serie A goalkeeper in 2017-18 (8). Coveted. July 17, 2018

Nevertheless, Souness believes Alisson will stand as Klopp's most important recruit if the deal is completed.

"On paper, if the players that they've brought in perform as expected, you'd say Liverpool will improve," he added.

"As a Liverpool supporter I'd like them to get a goalkeeper. It doesn't matter how good your team is, your goalkeeper will be asked to make saves in every game they play.

"It might be one save, it might be 10 saves but even when you're dominating the game there'll be a situation where a goalkeeper is called into play to do something.

"If you're going to win the big trophies you need a top goalkeeper."