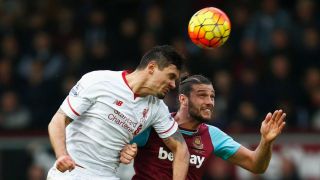 Dejan Lovren has issued a rallying call to his Liverpool team-mates to change their mentality and show more fighting spirit following a limp display in the 2-0 setback at West Ham.

Boss Jurgen Klopp labelled it "a day for being angry" after goals from Michail Antonio and former Liverpool striker Andy Carroll condemned the Merseyside club to defeat at Upton Park on Saturday.

Lovren is well aware of the need to become more consistent.

"We definitely need to change our mentality and we need to keep a better run of games and to fight more," the defender told Liverpool's official website.

"We are disappointed. It wasn't the best performance from us and we need to be angry with ourselves. "

Next up for Klopp's men is a League Cup semi-final first leg at Stoke City on Tuesday, with Lovren keen for a response.

He added: "I don't know the reasons why but we need to step up quickly from this because we don't have time to think about it now. We have the game with Stoke on Tuesday.

"We have a game in the cup and it's a big chance for us to get to the final.

"So we need to stay calm and we'll start to prepare for the Stoke game and try to be in the final."