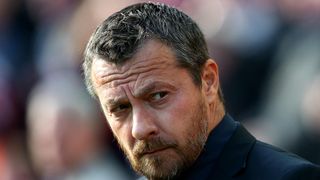 Slavisa Jokanovic described Liverpool's opening goal in their 2-0 Premier League win over his Fulham side as "completely absurd".

Aleksandar Mitrovic appeared to have given Fulham the lead late in the first half at Anfield on Sunday, but the goal was ruled out for offside.

And just 14 seconds later the ball was in Fulham's net, Mohamed Salah completing a rapid counter-attack to put Jurgen Klopp's hosts in front.

Xherdan Shaqiri added the second for Liverpool after the interval to move the Reds top of the Premier League table, albeit perhaps only temporarily with Chelsea and Manchester City also in action on Sunday.

Replays indicated Mitrovic was marginally onside, played on by Andrew Robertson, and Jokanovic was left baffled by the decision to disallow the goal, although he accepted Liverpool outplayed Fulham.

"I watched the clips and Robertson definitely didn't squeeze up enough," Jokanovic told a news conference. "My players are onside and scored the goal.

"Is the ball rolling [for the restart]? Probably yes. It was a crucial moment and we went from being one goal up to one goal down.

"It's a complicated situation, but you must be sure before you make this kind of decision. We can talk about this situation for hours but the damage is done.

"It's a completely absurd situation, but we needed to defend. This guy [Salah] is really fast and finished the action well, but the sensation is that we're frustrated, disappointed."

14 - There were just 14 seconds between Aleksandar Mitrovic being called offside, and Mohamed Salah scoring to put Liverpool 1-0 up. Rapid. November 11, 2018

Despite losing their seventh game in a row in all competitions, Jokanovic was determined to take some positives from his side's Anfield reverse.

"My team played a decent game against a complicated opponent," Jokanovic continued. "Even before we scored the goal we had two very good chances. We showed we can play organised and be solid against a really complicated team.

"I can't leave satisfied with this defeat but while we might not have taken a step forward, we definitely made half a step forward. The team showed desire, organisation and a positive face in looking for a better performance.

"Calum Chambers played as a holding defensive midfielder and gave us a little bit of balance and power. He did a good job outside of his natural position and can be an option we can think about in the future."