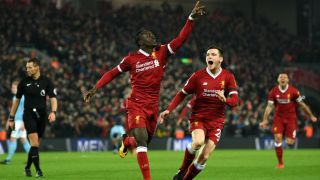 Jurgen Klopp knew it was important his Liverpool side showed they could thrive without Philippe Coutinho and he marvelled at their glorious response in the 4-3 win over Manchester City.

Klopp's side were playing for the first time since Coutinho joined Barcelona for a reported €160million but rarely lacked for attacking vibrancy in the Brazil international's absence.

"It was the right statement. It's not that I said in the meeting, 'Boys, it would help a lot if you win tonight and nobody speaks about Phil Coutinho anymore.'," the Liverpool manager said at a post-match news conference.

"We like talking about him, actually. I'm sure he is probably still jumping in his new living room in Barcelona, happy about the win.

"But, of course, it is important to show it is possible to play without him and we did that. So that's a very important statement, absolutely.

"We knew before the game that is how we can deal with it. We only can get three points. It feels good for tonight and now we have another long week to prepare for the Swansea game."

City remain 15 points clear at the top of the table – an advantage Manchester United can trim when they host managerless Stoke City on Monday – and Klopp believes history might smile fondly upon his team's exploits against Pep Guardiola's men.

"I said maybe it's a historical day today because maybe this is the only game they will lose in the whole season," he explained.

"They are just strong, they are really good, but I really think we deserved the win to be honest against a really good football team.

"I think they deserved the tight result, but of course we could have won 4-1 as well. We were really the deserved winner.

"It’s good to know for us that we can do it. We did really well and I am really happy about the game. It was fantastic."