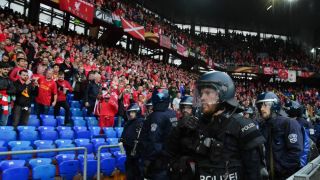 Liverpool and Sevilla have been hit with UEFA fines as a result of incidents that took place at the Europa League final on May 18.

Jurgen Klopp's side have been fined €16,000 for an "illicit banner and the setting off of fireworks", European football's governing body said in a statement.

Sevilla, who triumphed 3-1 at St. Jakob Park to claim a third title in three years, were slapped with a €17,000 fine for crowd disturbances and throwing objects.

Liverpool had also been charged with crowd disturbances after fans clashed in the stands, though UEFA's sanction appears not to apply to that offence.

Police were forced to provide extra crowd segregation after skirmishes between both sets of supporters.

Sevilla went behind to a Daniel Sturridge goal, before a Kevin Gameiro tap-in and a double from Coke secured the comeback win.