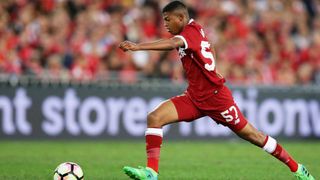 Liverpool prospect Rhian Brewster has been ruled out for up to four months after undergoing surgery on an ankle injury.

The 17-year-old has emerged as one of the most promising young players in England after impressing for Liverpool's youth teams and England's World Cup-winning Under-17 side.

However, his development has hit an obstacle after he suffered ankle ligament damage during a fall against Manchester City's Under-23s on January 12.

Brewster was carried off on a stretcher after receiving lengthy treatment and had to have surgery as a result.

Rhian Brewster is likely to be sidelined for three to four months after undergoing surgery this week. Full story: January 27, 2018

Liverpool have now confirmed that he is likely to miss the remainder of the season, estimating a recovery timeline of "three to four months".