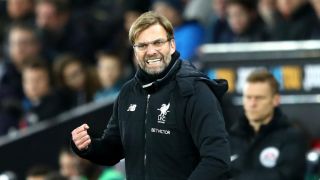 After going down 1-0 to Swansea City, Jurgen Klopp said Liverpool's sensational triumph over Manchester City last time out felt "like half a year ago".

Liverpool became the first team to defeat Pep Guardiola's side in the Premier League this season with a 4-3 victory at Anfield on January 14, but they were brought back down to earth by Swansea on Monday.

Alfie Mawson's first-half strike proved the difference, with a "frustrated" Klopp unhappy with the application of his players at the Liberty Stadium.

"Last weekend [against City] feels like it was half a year ago, it's not what I'm interested in," he told Sky Sports.

"We're frustrated, I'm frustrated, I'm angry because of what we did today. We have to get the points, we have to learn from it. The boys did better in the last few weeks but that does not help us tonight.

"We lost the game in the first half. Not only because we conceded the goal - It can happen like this -  but because we didn't keep the positions we wanted to be in.

"We wanted to do it differently but it didn't happen on the pitch for us. At half-time we said OK, maybe we can start doing what we wanted to do at the beginning.

"But because of the first-half we weren't that secure or confident in what we were doing."

"We had moments where we looked like we could score. The clearest chance we had was in the last second more or less, I don't know how the ball is not in," said Klopp.

"A point would've been OK but not what we wanted, so wouldn't have made the game any better to be honest.

"We had to play football and we had plenty of opportunities after the restart, but in the end it wasn't good enough."

The result ended Liverpool's 18-game unbeaten run in all competitions and left them fourth in the Premier League.