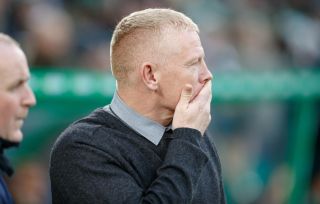 Livingston manager Gary Holt insists he never lost faith in his side as they produced a late comeback to avoid a Scottish Cup shock against Raith.

The Ladbrokes Premiership outfit trailed to John Baird’s opener until 13 minutes from time but ran out 3-1 winners.

Two penalties from Steven Lawless either side of a Lyndon Dykes strike earned the Lions a place in the fifth-round draw.

Holt said: “Overall, even in the first half on the balance of play, the result was merited.

“We conceded one shot and it was a goal. If we had come in at 0-0 I would have said ‘keep doing what you’re doing, keep getting it wide, keep getting balls in the box’. We’ve hit the post and the keeper has made a save.

“Just raise the tempo a little bit because it’s tough when a team comes with a 4-5-1 and makes it difficult, then you give a goal away and it’s even harder.

“Credit to the players, we were bold with substitutions and eventually we got the goals and I think the result is merited. We deserved the win.”

However, Raith counterpart John McGlynn felt his side should have finished with more for their efforts and was upset by referee Alan Newlands’ decision to award handball against Iain Davidson for Lawless’ leveller.

“I think he was turning his body because he was trying to read where the ball was going.

“We were 16 yards, going away from goal, and it touches his arm. It was not an automatic decision. He (Newlands) waited and was pressurised by the Livingston players.

“And it turned the game, it changed the whole game.”