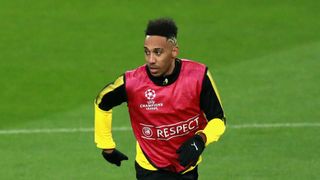 Aubameyang was omitted from the Dortmund squad for Sunday's 0-0 draw against Wolfsburg after missing a team meeting the day before.

Accusations of indiscipline and poor time-keeping have dogged the Gabon international, who was again extensively linked with a move to Chinese Super League side Guangzhou Evergrande over the mid-season break.

The 28-year-old has previously courted interest from Real Madrid and AC Milan, while Arsenal are reported to be the latest club interested in last season's Bundesliga top scorer.

Despite such turbulence, Stoger welcomed Aubameyang back to training on Monday and saw no reason to give him any special attention.

Asked by reporters whether the forward would be punished with extra training, the former Cologne boss replied: "No, if that was a punishment, I would have been there [on the training field] and would be watching him.

"I have the feeling that he is a very stubborn character and is also ambitious. I guess he understood [being dropped]. Let's see how it develops in the next days.

"For me it is just logical [that Aubameyang stays]. I expect everything to be as it was. He is a player of BVB, he trains and he is in our plans for the upcoming match."

Dortmund are back in action on Friday, when they travel to face Hertha Berlin in the Bundesliga, and lie fourth in the table following Sunday's stalemate, which was greeted by full-time boos at Signal Iduna Park.

Aubameyang has 21 goals in 23 matches this season, including 13 in 15 Bundesliga appearances.