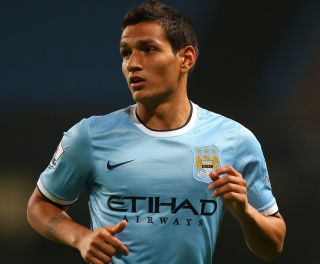 The 18-year-old became City's youngest ever goalscorer when he scored against Watford in the same competition last season and, after a handful of League Cup outings recently, he hopes to take advantage of a rare start.

Lopes has had to be patient at the Etihad Stadium with the likes of David Silva, Samir Nasri and Yaya Toure all playing in his preferred position, and he knows he must take the opportunity to impress Pellegrini this weekend.

"Cup games represent a big opportunity for younger the players at the club and I'm looking forward to being involved in more matches," he told City's official website.

"It's a different level playing for the senior team - a high-intensity 90 minutes, but it's good for me to learn with these players and play these games. I have to do my work and my job and hopefully I'll get more chances.

"I'm ready and will give 100 per cent because these are the games when you can make an impression and for players like myself and Emyr Huws who have both been in and around the senior team for the past few weeks, it's a great chance to improve as players and gain vital experience."

Lopes joined City from Benfica in 2011, and represented Portugal during the UEFA European Under-19 Championships in 2013.