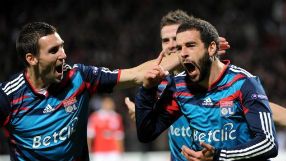 Lisandro, who scored a hat-trick in the 5-0 demolition of Arles-Avignon last weekend, opened the scoring midway through the first half before Miralem Pjanic doubled Lyon's lead after the interval.

Saint-Etienne moved up to sixth on 38 points thanks to a 2-0 home win against Brest.

RC Lens's hopes of staying up took another knock with a 1-0 home defeat by mid-table Toulouse.

At Sochaux's Bonal stadium, Lisandro collected a through ball from fellow striker Bafetimbi Gomis before firing past Pierrick Cros in the 22nd minute as Lyon geared up for their Champions League trip to Real Madrid next week.

Sochaux came close to equalising on the hour when Damien Perquis's shot was headed off the line and onto the bar by Lyon's Jeremy Toulalan before being cleared.

Lyon coach Claude Puel then took off Lisandro, Pjanic and Toulalan to give them a rest ahead of Wednesday's game against Real Madrid at the Bernabeu which is in the balance after a 1-1 draw in the first leg of their last 16 tie.