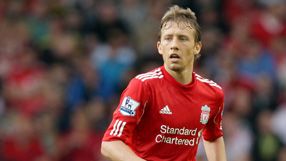 Andy Carroll’s late winner at Blackburn Rovers brought an end to a dreadful run in which they took just one point from 12.

The narrow victory over relegation strugglers Rovers is unlikely to alleviate the distress of the Kop faithful, who no longer hold any hope of qualifying for the Champions League.

Liverpool’s Lucas, 24, was ruled out for the season after injuring his anterior cruciate ligament in November with the Reds then sat three points off fourth place.

But since then they have struggled on the pitch, now lagging 13 points below Tottenham Hotspur in fourth having been overhauled by city rivals Everton, who they play in the semi-finals of the FA Cup at Wembley.

As a result, many Liverpool fans consider the Brazilian maestro’s injury the turning point in their season, but Lucas was quick to recall notable performances without him in the team.

"Yeah, fans say that, especially after a defeat," he told LFC magazine. "I think that’s normal for supporters to say to an injured player. I don’t think it’s just because I’m out of the team that we’ve lost games.

"I didn’t play when we won the Carling Cup or defeated Manchester City, they were great results.

"Of course it’s nice to hear and to know that people appreciate the work I was doing in the team. But I’d rather see the lads winning. I don’t want to see the team on a bad run."