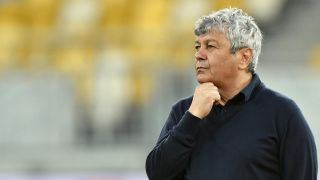 Mircea Lucescu remains optimistic about Shakhtar Donetsk's chances of reaching the Europa League final at the expense of Sevilla after Thursday's 2-2 draw in Lviv.

Marlos and Taras Stepanenko found the net to cancel out Vitolo's opener, but Kevin Gameiro converted a penalty late in the second half to give two-time defending champions Sevilla the edge after the first leg.

Nevertheless, Lucescu believes Shakhtar still have every chance of making it to the final in Basel.

"I think the final score reflects the game," Lucescu said at a news conference.

"We created a lot of chances in the first half and could have scored four goals rather than just the two we got.

"But in the closing stages of the match we tired a bit and made a lot of mistakes in defence.

"We still have every chance of making it to the final following this result, though. We have been doing well in away games.

"The players are upset because of the late goal, but we have to get over this and move on. We still have a good chance of making it to the final."