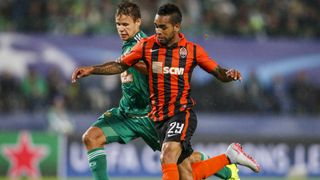 Shakhtar Donetsk coach Mircea Lucescu would sanction a transfer for Alex Teixeira, but insists the club have received no offers for the midfielder.

The 26-year-old has been at Shakhtar since 2010 and has helped the club to five league titles and three Ukrainian Cup successes.

And Lucescu told Shakhtar's official website: "Teixeira and I are talked a lot in the press now. They are spreading rumours about us allegedly leaving Shakhtar. At the moment, Alex is Shakhtar's player.

"We'll see in the summer; [for] now there's no point talking about it. This year, he needs to play so that he grows even more, despite the fact that Alex's level is very high even today. In this case he will be even more in demand.

"At the moment there are no official proposals, so it makes no sense to talk about it.

"This is what the press is spreading, mainly [the] English one. If there is an offer that will satisfy both the player and the club, I will fully support his move. I want to see my players perform in the best, top teams in Europe."