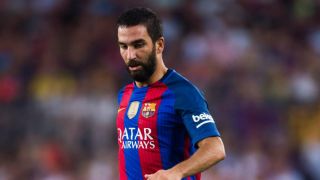 Turan endured a difficult first season at Barcelona after joining the club from Atletico Madrid, missing the first half of the season due to the Catalans' transfer ban, before struggling to live up to the high expectations from January onwards.

The 29-year-old received his fair share of criticism following his underwhelming debut campaign and there were question marks over whether the midfielder still had a future at Barcelona.

Nevertheless, he impressed on the left wing against Sevilla and Luis Enrique was pleased to see him shine in attack.

"It's really good to know that he can also play up front."

Luis Enrique became Barcelona's third-most successful coach following their Supercopa de Espana win - only behind Johan Cruyff and Pep Guardiola - but he was quick to credit the players for his successes.

"I feel very fortunate, but it's all thanks to the great players I have," he added.

"They never cease to surprise me in every game and every training session.

"They're unique, they're different."