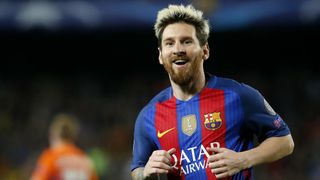 Barcelona boss Luis Enrique says Lionel Messi has proven to be unstoppable when he has reached top form.

The Argentina captain struck a hat-trick in Barca's 4-0 victory over Manchester City in Wednesday's Champions League clash at Camp Nou.

Messi has 12 goals and six assists from just 10 appearances this season, with four of those strikes coming in the two matches since his return from a groin injury.

Speaking ahead of his side's LaLiga trip to Valencia, Luis Enrique has backed the 29-year-old to continue his stellar run.

"If Leo is at his level, it's going to be very difficult to find a solution to stop him. We still haven't seen anyone who has managed it," he said.

Luis Enrique admits there will be an element of uncertainty about what to expect from his opposite number, but he is eager to aim for the victory in order to close the two-point gap to Atletico Madrid and Real Madrid at the top of the table.

"We're facing an unknown Valencia, given the short time Prandelli has been in charge," he said. "Their situation is not too positive, but the quality of their players can always make things difficult.

"We'll have to be effective in finding the spaces, more so against an opponent of a high tactical and physical level.

"We have to take the three points and hope the others don't. It's the same strategy from the start of the season: improving our form and earning points.

"Valencia is an intense place and Prandelli knows that. In my year in Italy, he was the national team coach and he showed that he can do things well. He's a very well-prepared coach. I wish him a lot of luck."