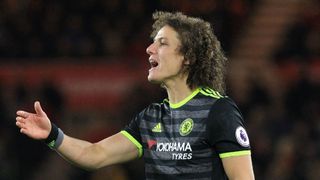 David Luiz has urged Chelsea to remain calm and focused in their pursuit of the Premier League title.

Chelsea responded with a 4-1 victory over Peterborough United in the third round of the FA Cup last weekend and remain five points clear of Liverpool at the Premier League summit, although reports of a bust-up between Conte and top scorer Diego Costa on the eve of Saturday's trip to Leicester City have provided an unhelpful twist to the narrative.

Nevertheless, Luiz believes it is a time for cool heads with plenty of twists to come in the title race.

"There is no reason to panic," the Brazilian defender told the Times of India. "It is only January. In the Premier League, the only important thing is to be top of the table in May.

"I never saw anyone win the title in February or March.

"We don't need to do anything new. We are top of the table. The most important thing is to keep the same mentality, the same maturity.

"We must stay calm. We can't do everything; we have to play with humility. We play against different teams but they can all work you hard.

"We are trying to improve. I never saw one team win the league without conceding goals – this is impossible."

Pedro has thrived alongside Eden Hazard as a supporting forward for the prolific Costa.

The former Barcelona man struggled for his best form on his debut campaign in England last season but has enjoyed a run of dominance for Chelsea that brings to mind his best days at Camp Nou.

"I hope it can continue, but in England it's very hard. At Barcelona it's normal to win most of the games, not here," he told the Times of India.

"It's very different here to in Spain but the main thing is we want to win the title.

"It's difficult because the season is very long, there are a lot of games still to play. I would love to win the Premier League because it's the strongest league in the world.

"I am enjoying my football more and I am very comfortable on the pitch and with my team-mates. I'm scoring goals and I want to continue.

"All the players are high on confidence. The team are fighting for each other on the pitch. The new system is good for the team and good for me too."