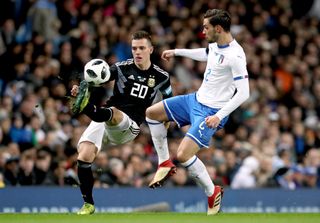 Manchester United have agreed a fee with Inter Milan for Romelu Lukaku while Giovani Lo Celso and Ryan Sessegnon are having medicals at Tottenham, PA understands.

It is understood that a fee of 80million euros (£73.7m) has been agreed between United and Inter for Lukaku, following a 60m euros (£54m) offer being rejected last month.

On Wednesday evening Lukaku’s agent Federico Pastorello posted a picture on Instagram of himself and the striker apparently headed to Italy, accompanied by the words: “Ready to take off …. direction Milano.”

And footage on social media appeared to show the player being welcomed to Milan by supporters in the early hours of Thursday morning.

Tottenham are closing in on deals for Real Betis attacker Lo Celso and Fulham full-back Sessegnon, with both understood to be having medicals on Thursday morning ahead of their respective transfers, and Spurs were also hoping to tie up a deal for Juventus striker Paulo Dybala.

The situation regarding Dybala is proving more tricky, owing to an issue with the player’s naming rights, and it seems increasingly unlikely that deal will happen before Thursday’s 5pm deadline for Premier League and Championship clubs.

Ajeti has joined West Ham from Basel on an initial four-year contract, with an option to extend for a further two seasons. The 22-year-old scored 14 league goals in each of the last two seasons for Basel.

Krafth, 25, has arrived at Newcastle from Amiens, putting pen to paper a four-year deal, and Brighton have signed 19-year-old fellow right-back Yapi from Paris St Germain.

Yapi is on a one-year deal, with a one-year extension option, and will initially link up with the Seagulls’ under-23 squad.

Amid the talk about other potential deals, it appeared David Luiz could move from Chelsea to Arsenal, with it is understood the defender had trained separately from the Blues’ first team on Wednesday and that the Gunners were pushing to sign him.

Arsenal were also reported to have agreed a fee with Celtic for Scotland full-back Kieran Tierney, and Manchester City were said to be close to signing Derby goalkeeper Scott Carson on loan.

In the Championship, Sheffield Wednesday announced the signing of Australia midfielder Massimo Luongo from QPR for an undisclosed fee, and Bristol City confirmed they had brought in Hungary midfielder Adam Nagy from Bologna.

It was understood Arsenal forward Eddie Nketiah – who the Robins had been interested in – was expected to join Leeds on loan for the season.

Also, the Elland Road club announced they had signed France Under-20 goalkeeper Illan Meslier on a season-long loan from Ligue 2 side Lorient.