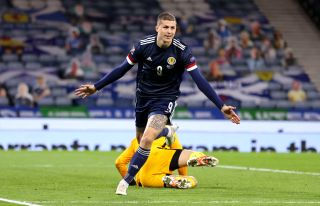 Lyndon Dykes feels Scotland are getting better and better after his goal sealed a 1-0 win over Slovakia.

The Hampden win kept Scotland top of Group B2 in the Nations League and continued their steady progress.

Steve Clarke’s team now have the chance to cement their position when they host the Czech Republic on Wednesday in their final game before a Euro 2020 play-off final in Serbia.

“As the game went on we started creating more chances and started having a bit more belief,” Dykes said.

“We played a long game the other night, 120 minutes, but still kept pushing towards the end and had a few more chances. As the game went on we kept getting better.

“When the goal went in I definitely thought everyone’s shoulders dropped and relaxed a bit more and that’s when we started getting a few more chances.

“It was all positive but we are going to focus on the next game to make sure we are still top of the group. Hopefully we get the three points and I get a hat-trick.”

🏴󠁧󠁢󠁳󠁣󠁴󠁿🔝 Here's how Group B2 looks after the third round of UEFA #NationsLeague fixtures. 💪#SCOSVKpic.twitter.com/zyvjqsCQZN— Scotland National Team (@ScotlandNT) October 11, 2020

Dykes has quickly shone in international football, having just moved from Livingston to QPR.

“I’ve been really enjoying coming in the Scotland camp with the boys,” he said. “I feel at home and I enjoy getting away with them and learning. They are a great bunch of lads. I am sure we have a great future ahead of us.

“Since I have come in I think we are only getting better.

“Everyone knows when you go away for internationals, you don’t get a lot of time to work on things and what the manager wants. But each time I have come in, training-wise, we are just getting better, getting more understanding. The squad is getting better and I think we are gelling well.”

A win and a clean sheet for this man on his debut.— Scotland National Team (@ScotlandNT) October 11, 2020

Scotland were helped by an even more recent addition, Andy Considine, who made his debut at the age of 33.

Speaking to Sky Sports immediately after the game, the Aberdeen defender summed up his feelings.

“Emotional, to be honest with you,” he said. “It’s been a long time since I have been involved in a Scotland set-up, but I suppose its just always believing that one day you will maybe get the call.

“I’m 33 now and obviously getting the call the other day was completely out the blue. But over the moon and delighted to be part of such a great win and keeping a clean sheet. It’s been a fantastic night.

“It was very nerve-wracking, I’m not going to lie. But to have the quality around you helps you through the game, Robbo (Andy Robertson) on one side of me and Big Deccy (Declan Gallagher) on the other, talked me through the game. But I have got enough experience of playing European football with Aberdeen, so that helps.”

Robertson picked up a booking, for kicking the ball away, which rules him out of Wednesday’s game, and Clarke said he would possibly look to call up another defender.