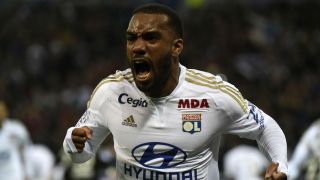 A report in Le Progres suggested the Premier League side had tabled an offer worth €48m, but the Ligue 1 side have insisted the bid was significantly lower and has been turned down.

"Lyon categorically deny having received an offer of €48m from Arsenal for Alexandre Lacazette like Le Progres reported in this morning's edition," a statement from Lyon read.

"The club laments Le Progres' decision not to contact the club before publishing this false information, which causes confusion on the day OL publishes its annual financial figures.

"The reality is that Arsenal have tabled an offer of €35m, which Lyon have not acted upon for one reason. OL will hold on to Alexandre Lacazette because he is irreplaceable and one of the key figures in Bruno Genesio's squad."

Arsenal are keen to add another striker to their squad to provide competition for Olivier Giroud and they have seemingly earmarked Lacazette as the ideal addition.

Arsene Wenger has said Arsenal are ready to "spend big" if the right opportunity comes along, but their attempt to sign Lacazette seems to have stalled for now.

The France international, 25, had previously been linked with West Ham United, but Lyon appear to have no intention of letting go of the prolific attacker.

Lacazette netted 21 goals in 34 Ligue 1 appearances last campaign to help Lyon to second place in the table, having scored 27 times in the French top flight the previous season.

His contract with Lyon runs until June 2019.