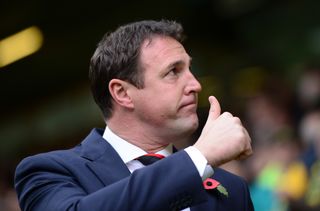 Cardiff goalkeeper David Marshall was the hero as Norwich had 31 shots, but could not find a way past the Scot, returning to Carrow Road for the first time since departing for Wales in 2009.

Controversy reigned as Leroy Fer found the net in stoppage time after receiving the ball from a throw-in that had resulted from an injury to home midfielder Alexander Tettey.

The goal was disallowed, however, and Mackay was delighted to come away with a point.

"I thought we defended as a team really well, our shape was excellent," the Scot said.

"There were a couple of scuffles around the goalmouth but most of what was coming in was long-range shots.

"I thought, in the second half especially, our two centre-backs headed everything away and defended very stoutly.

"It’s a clean sheet, it's our fifth point away from home and I'm delighted about that."

The draw means Cardiff have now picked up more points on the road this term than they have at the Cardiff City Stadium, and Mackay has targeted more impressive showings on the road if the Welsh club are to seal top-flight survival.

He added: "I spoke to a couple of Premier League managers in pre-season who talked about the importance of picking up points away from home and how important that actually is.

"I know Carrow Road really well and I know the atmosphere the fans can generate here and get behind their team and really put a team on the back foot.

"So to get a point today and the way we defended, I was delighted with that."