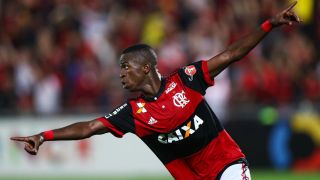 Before soaring with Spanish and European giants Real Madrid, teenage sensation Vinicius Junior is taking off in the NBA.

The 17-year-old Brazilian, who will officially become a Madrid player upon his 18th birthday on July 12 in a deal reportedly worth €45million, spent some time with countryman Nene and NBA franchise the Houston Rockets on Wednesday.

Vinicius watched the Rockets beat the Orlando Magic 116-98 in Houston, before later rubbing shoulders with Brazilian center Nene as the pair exchanged jerseys.

The Madrid-bound star is in the midst of his off-season after Flamengo – where he will remain on loan for the duration of Madrid's 2018-19 campaign – finished sixth in the Campeonato Brasileiro.

Vinicius scored four goals in all competitions after making his professional debut in May last year.