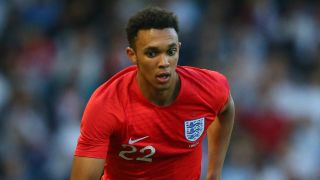 Trent Alexander-Arnold said that defeat in the Champions League final was the closest he has ever come to heartbreak, adding that he would have preferred to have embarrassed himself than see Liverpool lose.

The 19-year-old lined up against Cristiano Ronaldo and Toni Kroos on the right side of Liverpool's defence in Kiev and gave a strong account of himself before an error by goalkeeper Loris Karius allowed Real Madrid to take the lead.

After a 3-1 defeat, Alexander-Arnold collected a runners-up medal at the end of his first full season as an established first-team player and he told the Telegraph that he felt personally responsible for the result.

"When I walked down the stage with my silver medal, past the cup obviously, you cannot describe what the feeling is like but it is the closest thing to heartbreak that I have ever had," said Alexander-Arnold.

"Obviously it feels like you have got so far and you are so close to winning it but it slipped through our fingers. In a knockout tournament, it is not really about your own performance – it is about the team. So I would rather have had a stinker and got sent off and win it than play well and lose."

Alexander-Arnold, who made 19 Premier League appearances and scored one goal for Liverpool last season, said he had no regrets about withdrawing from the England Under-19s squad before the campaign began.

He is now part of the senior national squad as Gareth Southgate prepares his players for the World Cup in Russia, and the Liverpool youngster said the speed of his own career progress has been hard to believe.

Truly honoured to make my debut, an unbelievable experience for me and my family. Great preparation for the World Cup. Next stop Russia June 7, 2018

Alexander-Arnold said: "The under-19s tournament cut into a bit of pre-season time that I thought was valuable and time that I needed to be in and around the Liverpool team to show the manager that I was still improving and still had the hunger to get better every day. Now obviously it has paid off and the vision always was to play for the seniors.

"The FA was really understanding about it and I knew that they wouldn’t hold a grudge against me and why I was making the decision. They understood at the time that my idea was to push forward in club football and really solidify the senior spot – I am happy with how it has gone.

"It is hard to think just how far things have come in the last year or so."