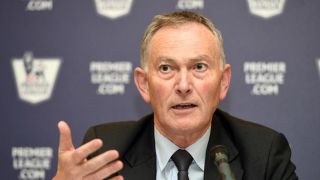 FIFA's executive committee announced the decision on Tuesday, amid fears that temperatures in Qatar in June and July would soar beyond 40 degrees centigrade.

UEFA and the Confederation of African Football are among those to have given their support to the idea, but the Premier League and La Liga are against the notion, with a final decision set to be made on March 19.

A World Cup in the middle of a domestic season would cause huge logistical problems to the European leagues, and Premier League chief executive Richard Scudamore has expressed his displeasure at the news.

Scudamore believes an interruption to England's domestic schedule "disproportionately impacts the sporting integrity of our competitions" and also issued a note of caution over potentially losing England's traditional fixtures over the festive period.

La Liga also released a statement saying they were "against" the idea, while stating their belief that Qatar's climate in May would be suitable to host the tournament in.

The Bundesliga were less forceful in their comments, criticising the increased "organisational and financial burden on the European leagues" but calling on FIFA to confirm the full extent of their plans for the tournament.

Meanwhile Serie A, when contacted by Perform, refused to comment on the situation until the final ruling is made next month.