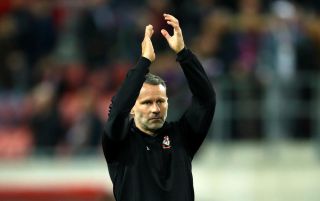 Manager Ryan Giggs has plenty to ponder ahead of Wales’ Euro 2020 qualifying clash with Croatia in Cardiff.

It comes just 72 hours after Wales’ pulsating 1-1 draw with Slovakia in Trnava, and Giggs’ side seeking to close ground on the top-two.

Wales produced one of their best performances under Giggs in Slovakia. But the quick turnaround in fixtures makes it difficult for him to simply say ‘same again’. Ethan Ampadu was ‘leggy’ in Trnava according to Giggs, and Jonny Williams was on the end of some heavy Slovak challenges. Both were substituted in the second half and could make way. Harry Wilson will probably be one new face as Giggs recognises that he might have to “freshen things up”.

Another day, another Aaron Ramsey fitness update. The Juventus midfielder stayed at home to work on his fitness as Wales headed out to Slovakia. Ramsey, troubled by a groin problem, trained away from the rest of the squad on Saturday and Wales will take a decision on him just hours before the Croatia game. It would be a huge boost for Wales if he were passed fit to feature in the campaign for the first time.

Wales have found themselves in one of the most competitive groups in Euro 2020 qualifying. Croatia would secure qualification courtesy of a Cardiff victory, with Slovakia, Hungary and Wales probably battling it out for second spot. Three closing wins would see Wales make it, but two could be enough – even if they lose to Croatia. Slovakia still have to go to Croatia. Wales have a game in hand on the top three and a possibly crucial head-to-head advantage over Slovakia.

Wigan’s Kieffer Moore was a revelation on his first competitive appearance in Slovakia. The 6ft 5ins striker held the ball up, brought others into play and capped his performance with an excellent first-half headed goal. Moore suffered a cut head for his troubles, but the former part-time lifeguard looks capable of making a splash for some time to come. As he admitted himself after the game, there are not many players like him in international football.

Wales have had good cause to rue the ability of Luka Modric down the years. Modric has often been the difference between the two sides – Croatia beating Wales 2-0, 2-1 and 2-1 in recent World Cup and European Championship qualifiers. The midfield magician dominated the opening hour of Croatia’s victory against Wales in June. But the 2018 Ballon d’or winner is now 34 and noticeably tired late on during that Osijek win for Wales to seize control. Can Wales finally curtail Modric’s influence?