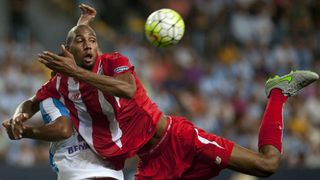 Steven N'Zonzi saw red as Sevilla and Malaga kicked off the new La Liga season with a dour 0-0 draw at La Rosaleda on Friday.

Midfielder N'Zonzi, a close-season arrival at Sevilla from Stoke City, picked up two needless bookings in the second half of his first Liga appearance.

N'Zonzi's second caution, earned for a cynical trip, came with 21 minutes remaining, meaning the visitors were forced to soak up some late pressure as Malaga sought to make their numerical advantage count.

However, the hosts were unable to do so and had to settle for a point.

Sevilla striker Kevin Gameiro was guilty of missing three chances in the first half, but there was little in the way of goalmouth action after the break.

Unai Emery introduced new boys Yevhen Konoplyanka and Ciro Immobile in an attempt to sharpen up his attack, but Sevilla's hopes of snatching all three points were dented by N'Zonzi's dismissal.

Malaga's Charles thought he had marked his La Liga debut for the club with a late winner, but the Brazilian's close-range finish from Juan Carlos' centre was correctly ruled offside.