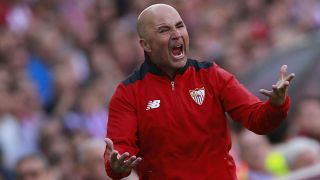 Sevilla's hopes of qualifying automatically for the Champions League group stages were dented on Monday as they suffered a 4-2 LaLiga defeat at in-form Malaga.

Franco Vazquez scored in each half for Jorge Sampaoli's side, but those strikes came either side of Pablo Fornals and Sandro finding the target. Diego Llorente's 77th-minute header then put Malaga in front for a second time before substitute Juankar rounded off the scoring late on, converting a rebound from Sandro's saved penalty.

As a result, Sevilla remain three points behind third-placed Atletico Madrid, who boast a superior head-to-head record. However, Sevilla do have a five-point cushion over Villarreal and remain on course to earn a place in the Champions League play-off round.

Vazquez opened the scoring after half an hour, exchanging passes with Wissam Ben Yedder at the end of a swift counter-attack before firing past Carlos Kameni with the aid of a deflection.

Yet Fornals found the top-right corner from 20 yards to pull Malaga level in the 38th minute and the visitors fell behind when Dani Parejo connected with thin air attempting a clearance and Sandro's low shot went through Sergio Rico.

A missed interception from Luis Munoz gave Vazquez the chance to make it 2-2 from close range, with 33 minutes still remaining.

It was Malaga who had the final say, though, Llorente heading home a free-kick before Juankar reacted quickly to ensure Sandro's poor penalty could not prove costly.