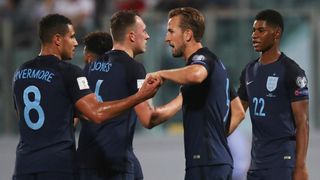 Harry Kane scored twice as England earned a flattering 4-0 win at Malta to close on qualification for the 2018 World Cup.

The visitors were frustrated for much of Friday's World Cup qualifying Group F encounter at the WTa' Qali National Stadium against a side that have yet to register a point in the pool.

But Kane made the breakthrough in the 53rd minute with his fourth goal in his past three internationals, providing the finish after Dele Alli's clever square pass had set up his club colleague.

A workmanlike, at times ugly, victory was secured four minutes from time when Ryan Bertrand found the net for his country for the first time, hitting a long-range shot beyond goalkeeper Andrew Hogg.

Substitute Danny Welbeck added a third in injury time before Kane completed the scoring to round off a victory that was not a fair reflection on the home side's determined efforts.

England's highly-paid collection of Premier League stars had struggled to break down a Malta side that had conceded at least two goals in nine of their last 10 World Cup qualifiers.

Still, while the game will not live too long in the memory, the result is all that really mattered for England, who sit two points clear at the summit of Group F ahead of a crucial home clash with nearest rivals Slovakia - who drew 0-0 at home to Slovenia - on Monday.